This cloud kitchen is seasoned with love, at 64 Nirmala Discovered Herself & Winked At Women empowerment 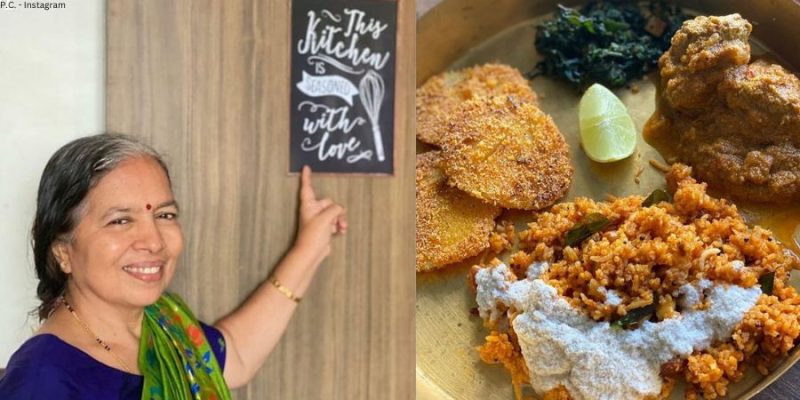 Covid19 was a monster of its kind & it was full of stories, primarily sad and gloomy stories but some were incredibly epic battle stories, love stories, Women empowerment and inspirational stories, people fought the monster and won the battle. Out of many, we have Another inspirational story for you, The narrative of a mother Nirmala Krishna Hegde aka Aai and her love for making food runs her cloud kitchen under the name of ‘Aai’s kitchen’, She started living her dream and waved a “hy” at Women empowerment.

“Cooking and feeding my family and friends has always been an important aspect of my life, and it has remained so throughout the years”.

Her love for cooking food and satisfying everyone’s hearts and bellies with her wonderful handmade cuisine led her to start a business and earn her own personal money; her son Gautam Hegde who belong to the generation which was a blooming under the clods of Women empowerment  understood what meracles can be create din kitchen. He worked with his mother to make this cloud kitchen business a success!

Aai’s story began when the entire world was under a covid19 shutdown, due to it many people were stuck and living away from their families, It was heart-breaking for Aai to observe that the staff of her building who couldn’t leave the premises & were unable to have a proper meal to eat, were really suffering during the lockdown.

Aai also noticed her son’s co-workers and acquaintances who were living alone and struggling without maids while working from home. She felt really bad for all the people away from home, corona was indeed a grey period for all but what could she do anyways? If Hiware Bazar’s success story, (An Indian Village turned from a powerty ridden village to now 60 Millionaires) can be real, every problem can be solved.

Finally, her strong empathy for everyone suffering alone forced her to take it all into her own hands ( literally) & provide them with healthy home-cooked food.

Aai decided to deliver them “Ghar ka khana” every day. They really  enjoyed “maa ka hath ka khana” so much, that they recommended Aai should offer her cuisines online so that everyone could order and eat it every day. This was the origin of her cloud kitchen’s concept.

Gautam encouraged his mother to start a cloud kitchen, and that’s when it all began at midnight by creating a WhatsApp group and inviting some building members.

They worked out the menu with 2-3 items. They initially started with just snacks, but then brought in the main course, both vegetarian and non-vegetarian, and of course dessert. 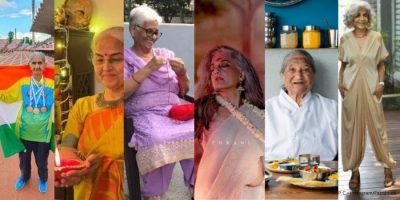 Instead Of Retiring At Age 60, These Dadi's & Nani's Became The Talk Of The Town - Epitome Of Women Empowerment

Aai cooked appams on the first day at her cloud kitchen and expected an order of 20 plates, but instead received an order of 80 plates and earned 8,000 rupees in two days, which shocked her but  inspired her to do something special in her life during the lockdown.

The appam and garlic chutney has been a bestseller since the beginning, and Aai claims that the meal has been requested over 100 times. Tamaraid rice, tomato rice, and khuma are among the most popular dishes. She also produces sabudana vada, puran poli, missal pav, and other dishes. The cuisine is reasonably priced; she asks Rs 100 for a dish of eight appams.

Because she’d never done anything like this before, she had no clue how to pack or even how much to pack.” Many of Gautam’s friends would send thier dabbas, which she would pack and send back.

“We only later grew more orderly and began using disposable containers for the food. I felt so amazing and, all of a sudden, I felt empowered”.

Initially, the main issue they had was with deliveries; Gautam attempts to fulfil most nearby requests using his own vehicle, but they later switched to all online food delivery platforms, infact you can even order your plat now if you are a Mumbaikar.

She refuses to let her age prevent her from serving everyone with a smile, as she delivers handwritten notes to her clients to cheer them up with delicious food. The construction of Aai’s cloud kitchen began in May 2020 and is still under progress, she is continuously adding new flavour to the plate. Women empowerment is at its best.

Aai’s cloud kitchen specialises in Maharashtrian, Goan, and Karnataka food. If you live alone in Mumbai and crave maa ke haath ka khaana, Aai’s Kitchen is the place to go. she belive that there is no age to start dreaming

“Always find ways to stay in touch with things that you are passionate about. You never know when you can use that to start a business. And never let your age define what you do.”

Aai proved that the only constraints are the ones you impose on yourself. It simply needs perseverance and determination to accomplish something in life. Aai and her cloud kitchen are absolute charmers to us. Mad4india wishes her all the luck.

If you loved reading the story of Aai & her cloud kitchen, you can also read about 10 Great Indian Inventions That We Thought Was Foreign But Originated In India

If you know more inspirational stories about any person, company, new idea, or social initiative, write to us on mad4india.com, or share such information with us on Instagram, Facebook or LinkedIn.