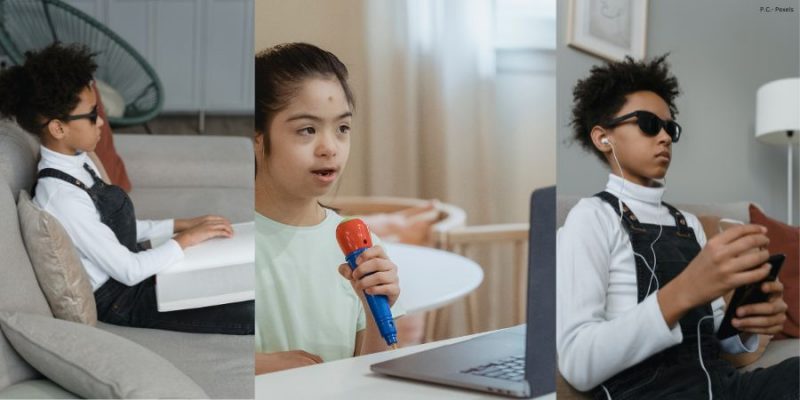 Gunjan Tomar uses Microsoft products’ accessibility features to reach her students with special needs right where they are. Tomar takes it as her responsibility to bring a change in the lives of Specially Abled students and give them the best possible chance to learn & understand things better. Each kid is special & has varied kind of needs, therefor a fun and interesting way of teaching work best for them, one initiative for the same is Froggmag which is Making Folk Art Easy for kids in a fun way.

A Guide Was Born

In the early years of her profession as a teacher, educators would stand in front of the chalkboard, giving lectures with a piece of chalk. Gunjan Tomar has watched the progress of her profession over her twenty-two-year career as an instructor. One person’s initiative can create wonders and we have a live-proof – Hiware Bazar, An Indian Village With 60 Millionaires – It’s A Story Worth Making A Bollywood Movie was the result of the sarpanch of the village. Similarly, Gunjan is creating a welcoming world for all the specially-abled students.

Tomar works as a Services, Action, and Activities Coordinator at DPS International in Gurugram, Her position is unusual as she facilitates the learning of Specially Abled kids who have varying learning needs.

She is also a Microsoft Innovative Educator Expert (MIEE) and a Microsoft Certified Educator (MCE), which she obtained in 2015 after one of her Microsoft Academic Colleagues mentioned how her work with digital skill enhancement was closely related to Microsoft’s initiative for innovation education in India.

A Step Closer To The Growth Of Specially Abled Students

Tomar’s career was inspired by the Microsoft Innovative Educator software system. Because of the self-paced classes, she was able to monitor and control her career progress. so, she decided to utilize this pattern and develop a unique teaching pattern for her Specially Abled students. Unlike her initial years when board & chalk was the way of teaching, now she tailors her lessons and responds carefully to each student’s particular demands with the help of technology.

She also has a developing and powerful network with which she shares knowledge and ideas. It piqued her curiosity and connected with her personal perspectives on the educational aim.

Gunjan Tomar’s main takeaway from MIE training was multi-modality—the capacity to integrate texts, pictures, and sounds in a single course to satisfy the variety in how each Specially Abled student learns.

“This can be challenging because Specially Abled children process information in a different manner”.

OneNote was one of Tomar’s first achievements. Tomar had a Specially Abled student whose actual age should have placed him in 7 standards, but his cognitive ability was in Class 2. The student was having difficulty with reading and understanding lengthy passages.

She introduced him to OneNote’s Innovative Reader function, which reads back passages and splits complicated terms into smaller syllables using TTS (Text-to-Speech) tech. The student’s reading and understanding skills improved noticeably once he began applying this tool. With children who suffer from mathematics, she suggests the OneNote math tool, which not just calculates problems but also explains the processes to arrive at the result.

Tomar’s experiences as an educator mean she is particularly attentive to her Specially Abled students’ talents, limitations, and most importantly, their areas of interest. These viewpoints allow her to match the best technological solution to her student’s needs. The mother of Tomar’s 9th-grade Specially Abled student says that she is supportive and sensitive toward her kid.

Her kid needs one-on-one attention to stay up with his classmates and she started seeing major changes since she contacted Tomar three years ago. She also said that Her son looks ahead to the hour-long lessons with Tomar in the early hours of the morning. It is the most crucial time of day for him since she is the one that goes further than the ‘what’ of topic learning and concentrates on the ‘why’ these things should value to him, letting him assimilate knowledge at his own pace. Then she moves on to her speciality—the ‘how.’

Tomar’s student credits his improved scores to his meetings with Tomar. “She understands my limits and can work around them,” he says. “now I’m able to keep up with the rest of my class” he adds. Tomar is changing the lives of Specially Abled kids and their families and she indeed deserves a salute just like These 3 Teachers who Went Above And Beyond To Educate The Children In Need

The Rise In The Technology Of The Education Sector

Before the pandemic, digital learning already was on top of the priority list. However, the pandemic has not only broadened but also increased its acceptance.

The rising use of technology in educational environments has had a major difference in regard to accessibility. Tomar’s institution, for example, has always welcomed the use of new technology in the classroom, and it accelerated implementation in the aftermath of the pandemic. For example, they began using applications connected with Microsoft Teams to teach lessons online and discovered that it opened up unprecedented possibilities.

Tomar provided a few cases to highlight this concept. One of her students was having difficulty putting his ideas on paper. But  He was, extremely comfortable in writing his ideas on Microsoft Word. It was a basic solution—changing the medium—that worked brilliantly.

Some more features that both students and professors alike were Cortana’s deadline reminders, the ability to record lectures to aid revision inside Microsoft Teams, and the translating capability.

There is one more function which typically use to educate Specially Abled students who are deaf or do not speak or understand English as their first language. The function of subtitles which got expanded and everybody start using them to analyze information that had been lost because of network issues and unfamiliar accents. The subtitles also served as a reinforcer, assisting with dual retention via audio and text.

The pandemic has trained each of us to be teachers of communication, technologies, and emotional and behavioural learning. So why not merge these?

Gunjan Tomar has been teaching other educators both inside and outside of her school, how to use digital technology to make classroom education more approachable to all Specially Abled students. She also consults other educational boards, and online training teachers in India and overseas regarding how to utilize different techniques to educate children with impairments.

“Education should not be a duty, but a chance to develop and learn. We have the power to be the change we wish to see,”.

If you loved reading this inspiring story of Gunjan Tomar changing education for specially-abled children, you can also read about Top 10 Inspiring Women Who Formed The Essence Of Women-Empowerment