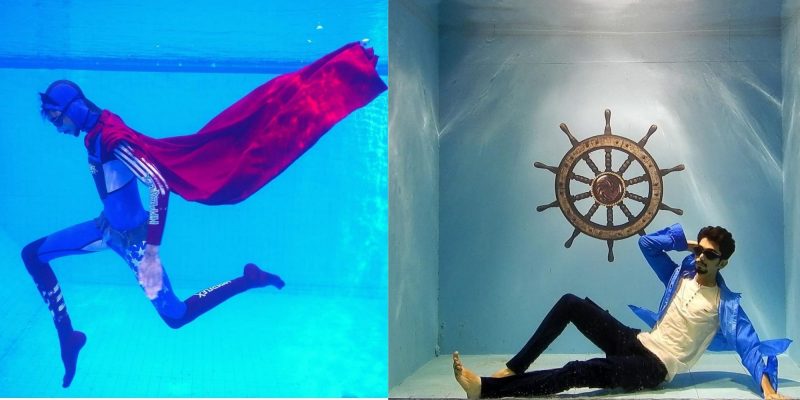 Hydroman is a Gujarat-based dancer who performs in a custom-made water tank.

Superhumans are expected to have great power that can help them to walk the path of redemption and protect the world from the evil eye. However, not all superhumans were born with magical powers, some of which developed over time.

To what extent can something amaze you? We can count an incredible number of things that you may have heard or witnessed. But dancing in an underwater world wouldn’t be one of them. Well, add that to your list as well. This Story starts with the protagonist named Hydroman. The one who rules the water.

Hydroman aka Jaydeep Gohil is a 26-year-old mechanical engineer based in Rajkot who has made the internet world go berserk with his underwater acts and dances.

For Gohil, it started with a love of swimming. At the age of five, he was introduced to bathing on a riverbank. From then on, the water became his friend. However, love took the back seat when the dance was introduced in his life.

It was just one beautiful day, when Hydroman’s father, at a young age, asked him to blend his dance with water.  His father joked that he would teach me to dance underwater — No matter how vague the idea was, Hydroman’s eyes started sparkling.

“ I began researching the art form. I wanted to seek inspiration from other artists abroad. To my surprise, however, I realized that no one was doing it, ”says Gohil aka Hydroman in an interview

This left Gohil with no choice but to try. He decided to get to the local swimming pool and apply his ideas.

“At first it was hard to understand where I was going. Gradually, I started singing songs and practicing underwater. I continued until I saw the need for a mirror to watch me as I moved, ”Hydroman explained in the interview.

Without guessing, what happened next – Gohil got his exercise tank set up at his house. This gave him more time to exercise while also helping him to see his movements.

Another problem with the pipeline is that he is the only one who knows what he is doing to lower the water. The work was to showcase art in the world.

However, even the camera did not help much, because Gohil could not shoot himself properly – sometimes he would come out of the frame.

The next thing Hydroman could think of was a glass tank. As easy as it may sound to have, Gohil had to behold hundreds, as there was no response from the numerous makers, until one, who finally, agreed.

“A lot of people told us it wouldn’t happen and it would break up if I went there. But I never stopped trying. Finally, my father’s friend said that he could help. With instructions from Dubai designers, we were finally able to have it. It was made of 24 mm glass, it was like a dream for me, ” Hydroman stated.

Now, the glass tank goes everywhere with Gohil. It just needs a crane to get installed.

Although all of this was about Gohil’s journey, what one might enjoy learning about is how he managed to pull it off. There is no rocket science behind it. 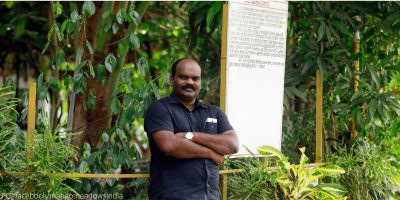 “I am one of the few people, freely, who can pull this off. My front limbs are bigger than my body. It helps me to maintain my balance when swimming. Not to mention that water is my fortress”

Most Gohil videos are five minutes long. He can sit in the water for three and a half minutes without much movement. But at the start of his career, he made sure that he takes regular breaks to get oxygen. “These breaks will not be visible. We will not be able to inform the audience that I am going up to the tank to breathe. This will make them lose their focus. I adjust the steps to make it look natural. Take, for example, if I take a flip, I will go up and breathe and go down. All of this goes hand in hand, ”he explained.

In 2016, he was invited to the Chennai exhibition for India’s first and largest water crossing exhibition. It may sound good to you. But, here’s the catch. Hydroman had to deal with 10 sharks in the aquarium. This, at first, seemed ridiculous. However, they explained to him that he had to wear a wetsuit, the one worn by their staff when they went to feed them and it would go well.

The important thing to know is that we should not touch sharks at all. If you do, it will bite, and taste your blood. He did not notice, and while Hydroman was dancing, his hand was about to touch the shark. Gohil’s photographer who was photographing this outside the aquarium had a small heart. He immediately told me to stop and get out.

After that, he had a strong will to leave the show. But leaving a pre-signed show midway would have been unprofessional for him. Quite aware of this fact he did complete 15-minute episodes for 6 days and bid farewell.

Hydroman’s art was enough to take him to India’s Got Talent, while also allowing him to share the stage with Akshay Kumar in the show. However, it lasted only a short time.

When you are about to read this Jaydeep Gohil aka Hydroman in Rajkot is probably preparing to jump into a water tank in the garage of his Naval Nagar house to rewrite history and wow you with his performance.

If You love reading about Hydroman, read more about From A Struggler To The Juggler Of Roles In Film Industry, Award-Winning Actor Rajkumar Rao Is The New-Age Actor