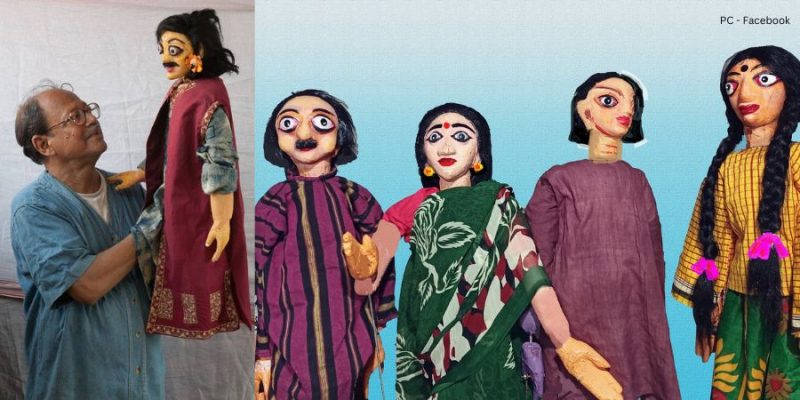 when one thinks of puppets the only thing that comes to mind is either Jaisalmer & sand dunes or age-old handicrafts. But have you ever thought of what heritage is hidden behind the curtain? Were they only a source of entertainment? Or were they more than that? – Were they a part of indian heritage & culture? Or were they a tool of some kind in history?

whatever the reality of history is, today we have almost lost the art & unfortunately, most artists are lost too. But as it’s often said, art lives longer than civilization. It can still be seen peaking from the windows of heritage resorts or films and cinemas but it needs a more bigger gate to walk in from. Finally, we have this man who is opening a new gateway to this cultural wonder of India.

non-profit organisation Bangopootool has been working for 22 years to revitalise and Dr Joardar is the man behind it. Bangopootool promotes West Bengal’s folk puppetry, known as Putul Naach, through research  & social work in addition to performances, Putul means both a marionette and a doll, whereas Naach means “dance of the dolls.” .the idea is to introduce marionette back to laymen as a source of entertainment.

Animated narration or marionette masters have a large following. It has a significant impact on people’s thinking regardless of their gender, caste religion or age. Puppetry is an excellent medium for public interaction because of its significant effect, marionettes are an excellent strategy to contribute to social teaching.

Few people believe that this art form began in Gangetic Subcontinent.
marionette theatre has a 5,000-year history in India. It was used at the time not only for entertainment but also for education and information. They were used for religious, social as well as political purposes throughout history.
Despite its Indian origins, it is an overlooked folk art, and this can be blamed on the fact that It cannot compete with the extremely quickly & thoroughly modern forms of entertainment that are available 24/7.

Dr Joardar, now 79, cites Emperor Ashoka’s use of a marionette to advertise Buddhism more than 3,000 years ago, it can be said that this art form was the first theatre production of our civilization.

Birth Of An Artist

Dr Joardar has been a puppeteer since 1980. He established his group Bangopootool, in 2000, after 20 years of hard work in the field. His speciality is rod puppetry. He was not a member of the traditional puppeteers guild. He is a retired senior accountant from CAG. But because He had a backstory with the National School of Drama, Dr Suresh Dutta (Another puppeteer) helped bring him into this community in 1980 & today he is contributing largely to the marionette theatre & marionette music. He receive the Sangeet Natak Akademi award (1986) & the Padma Shri.

He was just the audience who really enjoyed going to the theatre & this artform was more or less a lot like theatre. when he got closer to puppetry he realised that rod puppetry was a lot human like & it was very expressive. In this form, A gapit is inserted into the puppet’s head, and it can then be tilted forward-backwards, as well as left & right, just like a human skull. He examined the benefits and drawbacks of rod performance and transformed it into the easiest method of communicating with people.

Bangopootool has been assisting traditional puppeteers by giving them a new focus and direction. More importantly, Dr. Joardar’s efforts have resulted in puppetry becoming a part of the undergraduate curriculum of many schools & colleges.

Once in the practice, he realised that traditional puppeteers have fallen behind due to a lack of tech expertise and a failure to revitalise. The puppeteers continue to make larger & heavier puppets. An old-fashioned puppet, or toy, can weigh anywhere between 5 kg to 15 kg. Consider how difficult it must be for a puppet master to operate for hours while carrying a heavy toy. A raised hand can only be maintained for five minutes at a time.

The Bangopootool rod marionettes are all 3.6 feet tall. A toy has a head, face, and chest that are all proportionate. It is bereft of legs, which are only present for special occasions. The costume is designed to be worn underneath the waist.

Therefore with Bangopootool, he introduced hi-tech dolls that will make the art even more interesting & easy to practice. Dr Joardar introduced dolls that could open their eyes, have eye movements on their eyelids, and move their lips for special effects. Bangopootool under the guidance of dr Joardar has modernised Rod marionettes & other forms of this art. 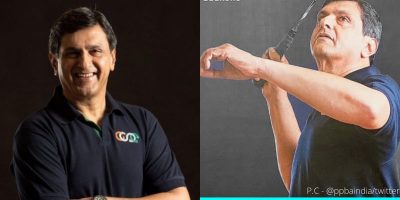 A new-age puppet weighs between 500 & 700 grammes, far less than the least 5kg seen in traditional marionette.

The body & head are now decided to make of sponge & thermocol, with a PVC pipe connecting them. The palms are constructed of thermocol & not of wood now.

The lips, eyes ears, and nose are made of paper and are connected to the head. Wigs & eyelashes are also commonly used. The hand is made of foam, & the hosiery substance is wrapped around it to form the skin. Costumes and jewellery are also worn by puppets. Each toy is handcrafted and takes between seven and eight days to complete. Only one doll costs around Rs 5000. They have a capable operating head that is moved around, unlike traditional rod marionettes.

Future Of The Art

Dr Joardar laments the lack of puppet schools and courses in India. He believes that this art should be passed down to future generations. Children should be taught about puppetry & how to make lighter, easier-to-manoeuvre marionettes. “Children learn puppetry quickly.” This has been observed in several workshops.”

Egra Sarada Shashi Bhusan College, a unit of Vidyasagar University in East Midnapore, launched a graduate course in puppetry in 2019. Dr Joardar has a chapter in one of the textbooks, ‘Bangodesher Pootool Natyakalain the course. The Ramakrishna Mission in Narendrapur & Baruipur College will soon begin a puppetry course.

Every puppeteer must know how to draw. He must have an artistic sense of acting as well as knowledge of music, song, art, and literature, says Dr Joardar, who has written 600 songs and composed music for 150 of them.

The teamwork theory, acting, practical, music and toy-making.” This helps to keep students motivated. We place a greater focus on puppetry workshops and choreography seminars than on stage concerts. The team’s focus is to train a new generation of marionettes where ever they go to ensure the survival of the traditional art.

Serving What Should Be Served

According to Dr Sardar, the group has been collaborating on different storylines to pique the interest of both adults and children.

Then there’s ‘Bisollokoroni,’ a play about deforestation, ‘Kurani,’ a comedy about a street girl who’s become famous, ‘Sadhu Sabdhan,’ and other newer themes,” he says.

Art is gradually dying because the present generation is uninterested in the art form.” They believe that puppets are difficult to control. It takes a significant amount of time and technology and knowledge. It is entirely our fault. “We, the grown-ups, were unable to persuade the children of the importance of puppetry.

He is now making preparations for the Dhaatu International Puppet Festival 2023, which could take place in Bengaluru in January of the respective year. His 15-member theatre company will operate live marionette stage shows, hold workshops, and conduct puppetry seminars at this festival. The slowly vanishing artform found its magician, and the future for puppetry is bright and clear finally.

If you liked reading this story, you can also read about This IITian Left His Job To Make Chemical Free Shampoo For You, Read To Know More

If you know more inspirational stories about any person, company, new idea, or social initiative, write to us at mad4india.com, share such information with us on Facebook or LinkedIn. 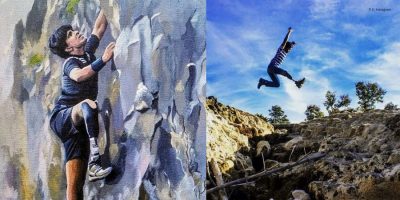