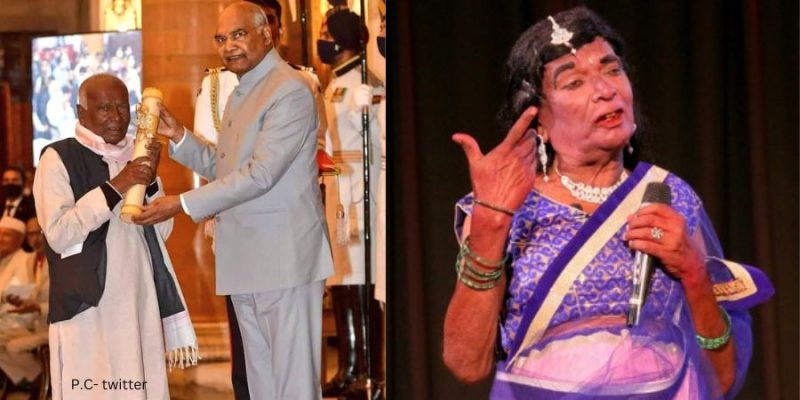 Folk dance has got a special place in our culture but unfortunately, many traditional dance art forms are dying a slow death as there are very few caretakers for these art forms. There are many reasons for it but one major reason is, the lack of an appreciative audience and stubborn artists who are ready to endure any hardship for the sake of passion.

The protagonist of our story is Padma Shree Mr Ramachandra Manjhi who was a worshiper of art and ruled the stage till the late day of his life. He performed a forgotten art form for decades and made friends with all the problems that came on his way.

Mr Ramachandra Manjhi, a resident of Bihar’s Chapra district performed a folk dance of Bihar called “Launda Naach” for the past 84 years.

In his career span of eighty years, many people have been inspired after seeing his folk dance performances on stage. His folk dance promoted stories & situations of women. Launda Naach talked about the suffering of women. The people of Bihar started respecting women wholeheartedly after watching his performances. People have even shed tears while watching him perform on stage.

This legend received a Padma Shree Award in the year 2021 for his commitment, dedication, and performances to carry the legacy of Grameen Natak for over 8 decades.

We lost the gem on 7th September 2022, But as it is said great personalities go far but are never forgotten. Today we are going to tell you about the remarkable journey of this old man and the journey of becoming a Padma Shree Awardee despite having so many hurdles in life.

Before starting with the journey of this amazing folk artist let us explore a little about this folk dance of Bihar which created a dancer in him.

“Launda Naach” is the folk dance of Bhojpuri speaking community of India, Nepal, and Mauritius. It is performed by Men who cross-dress as women called the “Launda”.

The earliest mention of Launda Naach was found in the 11th century in the Bhojpuri region which was then a folk dance art form. The idea of turning this art form into something known as the people’s theatre was conceptualized by Bhikhari Thakur.

The last disciple of Bikhari Thakur, Ramchandra Manjhi inherited a great legacy of this folk dance. The melodious voice of Ramachandra was recognized by one of his family friends when he was at the tender age of 10.

He joined the performing arts when he was barely 10 years old. Back then he was asked to perform for a small group audience, which he did well and started earning from that. By the time Naach had just started to flourish in Bihar, his Dalit parents didn’t mind his cross-dressing as they were good on money.

In fact, they felt honoured by the by-products of theatre – Money, and fame. But unfortunately, the world could not perceive this Naach in a good way for long.

Tho the dance form was flourishing when he started performing as a child, with time he started facing problems due to his passion. By dressing up as a woman and revealing his feminine side to the outer world he used to face a lot of problems while countering the normative masculinity.

While he used to ace his art and perform confidently in a Ghaghra choli, he faced many taunts, especially from men. 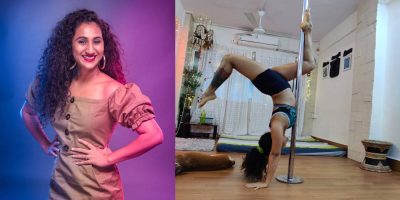 As time passed Launda Naach came to be associated with a vulgar artform, and Ramachandra Manjhi was named an ill-bred of society.

He was mocked for not being a man and sexually harassed, sometimes even physically assaulted just because the men of the society saw him dressed as a woman. Men used to poke him when he went near them to take money.

But as time passed he learned to tackle such men to an extent where he also dared to discuss with them some of the serious issues of that time including child marriages. With the help of his art & talent, he created strong lessons for all his audience.

He stood strong and even stopped the practice of marrying young girls off to old people in his village.

Goodbye To The Padma Shree Ramchandra

His whole life was a show written by destiny, all his hard work and determination paid off when Ramchandra was felicitated with the Sangeet Natak Akademi Award, the highest recognition given to practising artists of India in the year 2017 and then the Padma Shree, India’s fourth highest Civilian award, in January 2019.

A month before his demise the 97-year-old had performed in a ghagra choli, did his own make-up, and delivered a stunning performance in West Champaran on World Yoga Day.

At the age of 97 while performing the last dance of his life he lost his balance and missed achieving the near-perfect Thumka he gets usually but his eyes, voice, and body language were as perfect as a Sautan (mistress) in Bidesiya (a popular play written by the late Bhikari Thakur) & had also received a standing ovation.

But since every story needs to come to an end, the late Padma Shree Awardee left for his heavenly abode on the 8th of September 2022 at the age of 97 years.

Major celebrities including Mr Pankaj Tripathi and the current Chief Minister of Bihar Mr Nitish Kumar expressed their grief at the demise of the Padma Shree Awardee, late Mr Ramchandra Manjhi on their social media handles, including Twitter.

Ramachandra Manjhi was a true legend, his ability to perform with the same zeal and enthusiasm till his late day despite having weak eyesight and age-related issues continue to be an inspiration for many. We salute his stubbornness for passion.

Mad4India is continuously collecting inspiring and motivational stories for you, keep growing and stay hydrated with positivity.

Just like Ramchandra Manjhi, there are many people who are currently  working hard, even facing challenges in life – Read about People With Disability Who Are Turning No Stone Unturned To Make This World A Better Place

If you know more inspirational stories about any person, company, new ideas, or social initiatives, write to us on mad4india.com, or share such information with us on Facebook or LinkedIn.